The 65816 is almost a drop-in upgrade to a 6502 system, bringing 16-bit operations and new opcodes and addressing modes and a 24-bit addressing space. In this case, the upgrade is running at 16MHz, so there's a sophisticated 4-layer board to be built - Michał "Pasiu" Pasiecznik's prototype upgrade card. It plugs into the original 65C02 socket, and accepts the original CPU in a socket on top.
The demo - called "Control" and originally by Oxygene - is in fact a backport from the Amiga.
There's a limitation to speedup when a fast CPU upgrade has to spend a lot of time writing to slow system memory to update the screen - and another missed opportunity if the new CPU has more capability but is just being used in compatibility mode.
Click to expand... 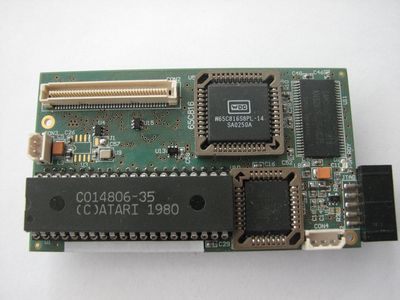 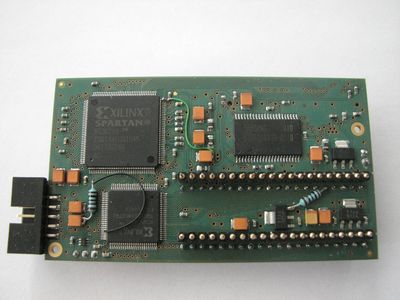 The card is placed in a socket of the original 6502C, which in turn migrates to the card (without the 6502C my card simply will not work). In the case of XE series you'll need an additional adapter for connecting the card. It can be visible as a NEW DEVICE - you'll need to connect two wires literally. No additional clock signals are needed. You don't need to connect an external power supply, but of course the standard Atari AC adapter will not enough.

This device would provide several modes ultimately, starting from the almost full compliance with the standard Atari - up to independent work.

A prototype works in the computer with Q-MEG OS, standard AtariOS and VBXE ver 1.0. As for the compatibility with other extensions, it should not be problems with cooperation, if they are made in accordance with the keeping all timings for the 6502C.

I do not plan any pre-orders in the near future until I consede that the status of the project is more than adequate.I attached two screenshots from SysInfo. MIPS measurements were performed with the screen turned on.

> 20 MHz Turbo board for the C64/C128 Details
> Features the 65816, a further developed 6502 type processor Details
> SuperRAM card allows to have up to 16 MB memory Details
> Highest possible compatibility