One new release, one little leap towards the milestone of upgrading all my
simulators. Today's release is a classic by Gakken: Tom and Jerry Popper.

The game has been rewritten from scratch and new graphics and sounds have
been included. This is the usual comparison between the new and old version
of the game simulator: 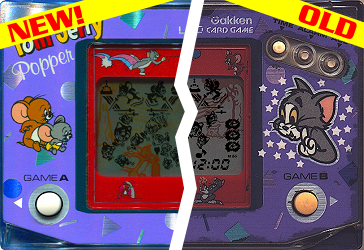 Grab them from the usual downloads area.

The time has come to release the final version of all (59) games to the
newest Standard 5 format. This update was announced over one month ago and
follows about six months of hard programming work and one month of intense
beta-testing and refinements. During this time, i have been working closely
with very talented programmers and graphic artists who helped out a lot.

In addition to all the features of the "beta versions" published in October,
the new releases feature new functionalities and bug-fixes. For example, it
is now possible to switch full-screen and windowed modes from the on-screen
menu or by pressing F12 in-game.

Today's news is not just about the release of all Windows versions of my
games. Thanks to the effort of great guys like Andre Leiradella, HCF
Retrocoder and KMFDManic, all games are now fully playable on more than 15
platforms including Android, Apple, Raspberry, Linux, PSP, PS3, Xbox 360,
WiiU and the newest NES and SNES Mini consoles!

The list of new files updated during the past few weeks is impressive:

All files available for download at the usual downloads page.

MADrigal's Simulators has gone social! The brand new Facebook page will
provide updates on the world of handheld simulators on a regular basis, so
get connected!

A new article and video review of this project was recently published on
Emumovies. The article is now available for download on the usual Press
Review page.

...so you better stay tuned! 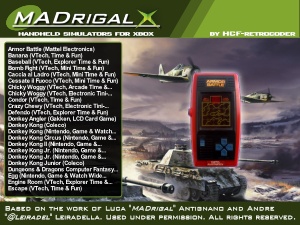