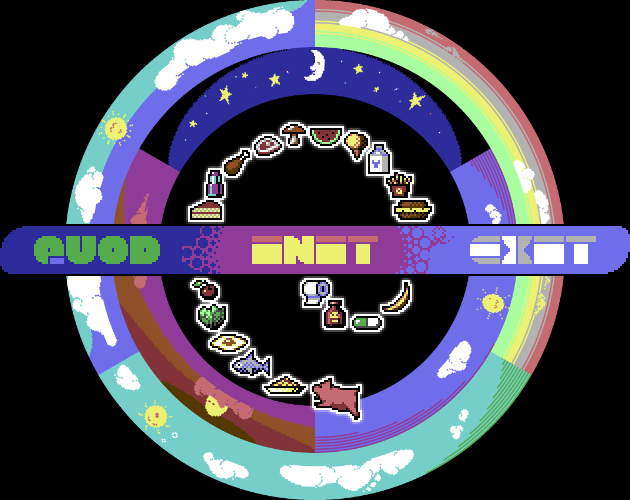 For a while, my posts have all been about MAH v2.0, but, in the meanwhile, I have improved QUOD INIT EXIT as well - and now it's available for download!

Although the game is for C64, AmigaOS 4 and Windows users can install and play it as if it were a native application thanks to the install packages available on itch.io

1. Fixed mice appearing in the HUD (and maybe even worse things) due to beyond-boundary writes.
2. Fixed flagging of subsequent pill catches (there were actually counted up to 255, although that was not visible in the HUD after catching the poison).
3. Fixed screen initialization ($d016 was not initialized).
4. Fixed poo drop (if started when Zampo was in mid air, the poo would stop in mid air as well).
5. Changed points handling: now they start decreasing only after catching the toilet roll, but do it at twice the speed.
6. Changed pause controls: now [F1] pauses and unpauses.
7. Added return to BASIC by means of [RESTORE].
8. Touched up dawn, morning, and sunset skies graphics.
9. Touched up pill icon.
10. Shifted vertical alignment of text characters 1 line down.
11. Changed intro text.
12. Changed scrolltext.
13. Made a few optimizations (in particular, moved all the variables to the zero page).
14. Added a separate loader (based on the Covert Bitops Autoconfiguring Loader/Depacker) that loads the game more quickly from disk (the game itself is still a single file that can be loaded directly, so who uses other speed-up solutions does not need this loader).
15. Added EasyFlash version.
16. Touched up manual.
17. Fixed uninstall icon for Windows package.
18. Updated skies in icons for AmigaOS/Windows packages.
19. Fine-tuned CRT settings for AmigaOS/Windows packages.
Click to expand...