With that in mind, my immediate to-do list is as follows (for starters, and in no particular order):


All of which I hope to achieve within the next couple of months.
Click to expand...

Apologies for being absent here for months, and especially for holding up the release of this fantastic game :/

So an update - a test pcb has been ordered and will be sent to zbych.zr for testing.

Cover render was created by Thomas Koch (the guy who does the covers for Return Magazin), but sadly is still not finished. He assures me 'soon' and has set some time aside for it. As soon as that is done, the inserts and labels can be ordered and manual completed.

Manual text is in progress.

Although the cover art is NOT within my control, all going to plan the game will be available within a months time.
Click to expand...


Way back at the end of 2007 - back when RGCD was still a disc-based magazine - I reviewed an Atari XE/XL game called Yoomp!, a game that I was asked NOT to describe as “Trailblazer in a tube” (which in fact, it pretty much is). Truthfully though, Yoomp! is in fact a 3D reinterpretation of a Atari 8-bit game called 'Jump' by D. Johannsen, originally released back in 1986 - which is coincidentally the same year as the aforementioned Trailblazer.

Anyway, to cut a long story short, we championed the game back in 2007, awarding it 5/5. You can read the full review here. As to be expected, discussions of porting the game to other platforms popped up across various forums and irc groups, but at the time Yoomp! was generally considered to be a game that would be impossible (or at least incredibly difficult) to convert over to the Commodore 64.

Fast forward to 2016, and Zbigniew ‘Zbych’ Ross (joined by MCH) took it upon themselves to achieve the near-impossible task of creating Yoomp! 64 - a game that RGCD together with Psytronik will be releasing in the next few weeks on cartridge, disk and as a ‘pay-what-you-want’ download.

Zbigniew’s port (as briefly mentioned in the previous issue of Vandalism News) shows off what a capable beast the humble Commodore 64 really is, with 23 levels of increasing difficulty, smooth rhythm-synchronized gameplay and some bassbin-rocking new SID tracks from MCH.

As with the original Atari 8-bit version (and indeed ‘Jump’ before it), in the opening stages you are gently introduced to the different tile and bonus types - including jumps, holes, teleports, tunnel stop and start, increase and decrease brightness, lightning and screen-shake - and of course the occasional extra life and long jump pick-ups. Passwords are earned as you progress, and you’ll need them too - the game gets pretty brutal near the end!

The main hold up on our end was of course the family issues I had last year, but the end is finally in sight -
.......
Click to expand... 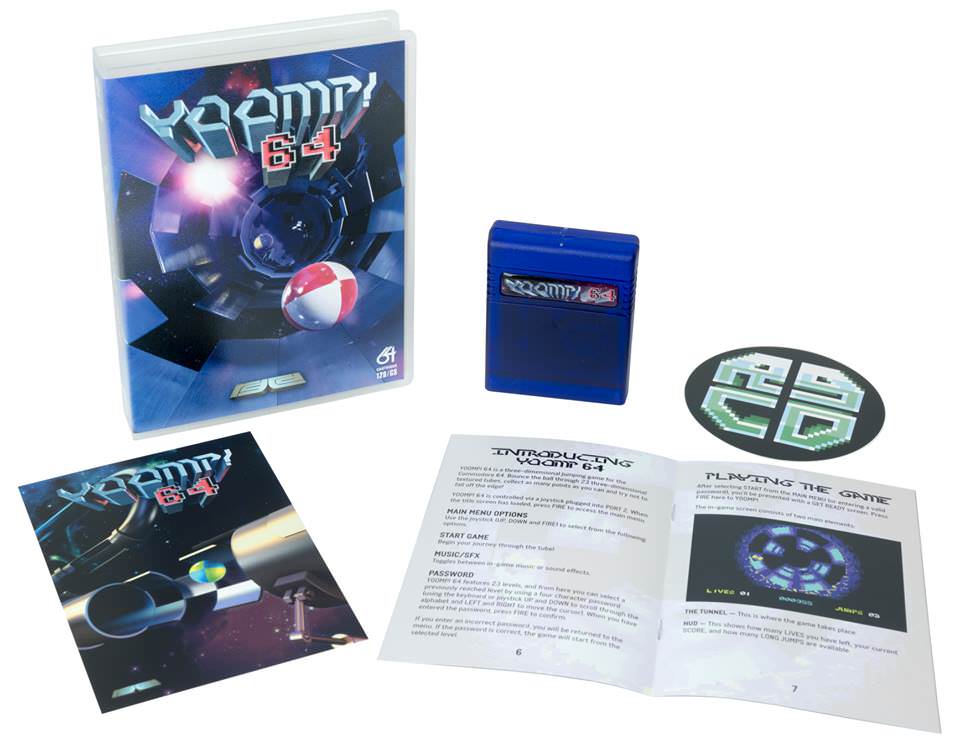 A few years ago I discovered that C64 emulation was not perfect - and because of this (and for the nostalgia) I decided to get hold of a real Commodore 64. I started to become more interested in retro computers and current events related to C64 - I never imagined that the development scene would be so active on this computer, with new hardware and software being released every week! Anyway, one day I have found an article describing games on various retro computing platforms, and among them there was a write up about Yoomp! for the Atari 8-bit.

After playing it on an emulator I enjoyed the concept of Yoomp! so much that I decided to write a similar game for Android. Of course I wrote to the author to secure permission, but Eru (author of the game) wrote back explaining that although he cannot stop me from creating an Android version, he'd prefer it if I didn't as he had already started to develop a version for mobile platforms himself.

So, I stopped work on the Android port and started to wonder why nobody had created a version of this game for C64 yet - after all, it's the best 8-bit computer in the world!

After some research I came across a thread on Lemon 64 regarding a previous attempt to convert the game, and I read Eru's posts explaining how the game works. However, the Atari 8-bit and C64 are very different machines so the same methods were not 100% relevant. On the Atari version the image of the tunnel is scaled 2x (horizontally and vertically) via hardware. Scaling the image (graphic) on C64 in a similar way was a real problem. For example, Hewson's Eliminator achieves a similar effect by only drawing every 2nd line but the overall result would not work for Yoomp! as the image would be too dark and fragmented.

Instead, I opted for a different solution – using the sprites. In the multicolor mode one pixel has a width of 2, so by enabling double height for the sprites these pixels become square. This not only simplified my calculations, but this way the scaling would be done 'in hardware'. The resulting tunnel area is drawn using 6 x 4 sprites, giving the tunnel a size of 144 x 144 pixels (72 x 72 pixels non-scaled).

After an exhausting fight with raster IRQ, I had an area on screen ready to draw the tunnel - so now the next step was to animate it. Using C# I wrote a program to draw the tunnel on a bitmap and at the same time it generates the assembler code responsible for drawing mapped graphics from a 2D texture into an array of sprites.

My first approach to draw the animated tunnel was similar to those used in modern graphics systems – first draw the texture data on the sprites, then scroll the content of the texture so it gives the illusion of movement. Unfortunately, it turned out that even using the speedcode technique (generated assembler code to maximize execution speed) it was still too slow. After 5 or 6 attempts with different code I finally managed to get a satisfactory speed but only after reducing the tile size to 4 x 8 'texels', half the size used in the original Yoomp!

After some further discussions about my project with Eru, I started to understand a key secret to how the Atari version worked. It is all about special arrangement of tunnel data in memory, allowing the speedcode to achieve data mapping and scrolling in a single pass, so there was no need to scroll the texture in a separate frame!

I adjusted my C# application to generate speedcode for this optimised data layout and... bingo! The tunnel was scrolling much faster. This data structure required quite a lot of memory; the tunnel texture uses 16KB, the speedcode for drawing requires about 13KB, and a 6KB buffer for sprites means that already half of the Commodore 64's memory is consumed. However, the problem of drawing the tunnel had been overcome, so adding the remaining logic of the game was comparatively easy!


Yoomp! 64 is available to buy from the following online stores: